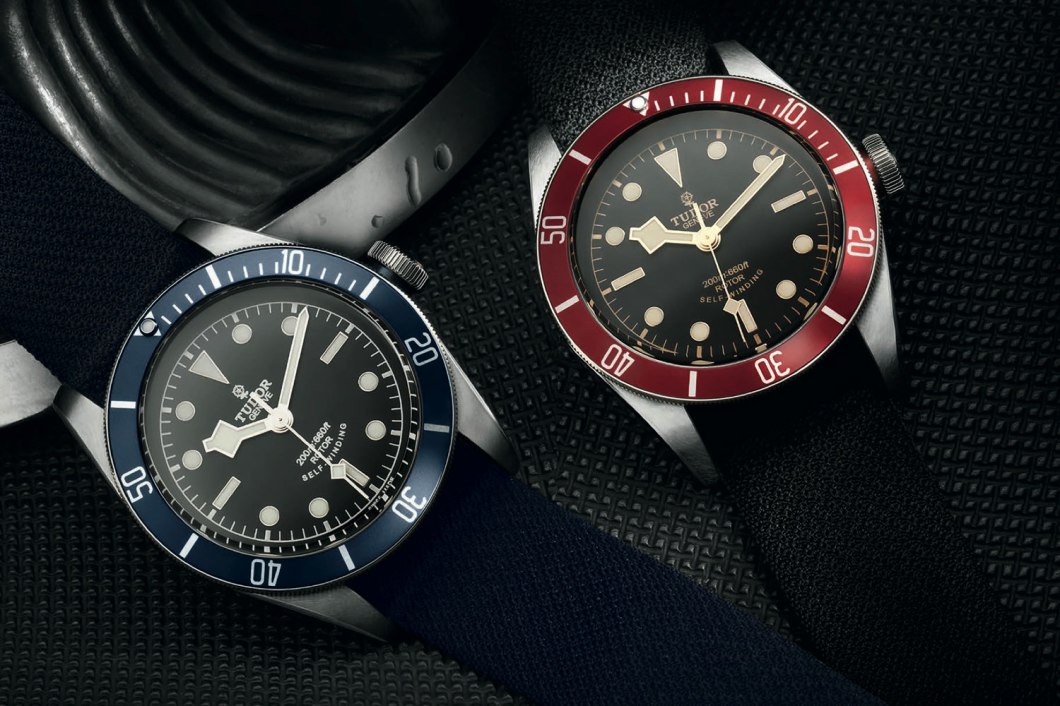 The Tudor Heritage Black Bay series and its 2 models – Black Bay Blue and Black Bay Red – were the most talked about watches from Tudor when first unveiled back in 2012. They went on to be arguably the most popular watches Tudor has introduced in recent years. Critics and consumers alike embraced it with much enthusiasm.

The ‘Heritage’ series revolve around Tudor’s initiative of digging into its archives and reinterpreting well loved designs from yester-years in a modern context.

Generally (and mistakenly, if I might add) regarded as a poor man’s Rolex since Rolex owns Tudor and Rolex watches cost about twice as much, this stigma is slowly starting to change.

When I look at Tudor, I see a brand who is unafraid to make its own mark by taking bold approaches. Tudor is moving in all the right directions and breaking conservative design barriers to create a brand identity for herself, instead of perpetually residing meekly within the looming shadow of its behemoth cousin.

Their recent shift to create their own movements shows their desire to be taken seriously and the ‘recklessness’ they exhibit in overturning conventions will no doubt resonate with the younger (more adventurous) crowd – that same bunch who feels that Rolex watches are meant for their dads.

Tudor made a milestone in 2015 with the introduction of their first in-house movement, MT5621, which found its way into the Tudor North Flag.

A second movement, MT5612, was created and used in the Tudor Pelagos.

With the Black Bay Bronze, they made some modifications to optimize the movement to fit into its larger case and this also marks the first Black Bay to use an in-house movement – the MT5601.

The MT5601 movement displays the hours, minutes and seconds, and beats to a frequency of 28,800 beats per hour.  A power reserve of 70 hours grants you the convenience of taking off the watch on Friday night and not having to reset the time come Monday morning.

The movement uses a silicon balance spring, thus negating any magnetic interference ensuring your watch retains its precision.  The newly launched movement is also COSC certified so you know they are packing the very best, and not just creating movements as a novel endeavour.

The Tudor Black Bay ‘Bronze’ truly stands out in this aspect: it is a dive watch made with bronze.

Bronze is not a material seen commonly in luxury watches so this is a plus point if you’re looking for something that sets you apart. Chemically, bronze is an alloy comprising of mainly copper with a small percentage of tin. The main drawback of bronze would be oxidization, which leads to its corrosion under prolonged exposure to sunlight and water. But fret not, improvisation has been planned and taken care of.

The case of the Black Bay Bronze is constructed from conventional bronze with the addition of aluminum to slow down the oxidization process. While it is beyond a doubt that the case will lose its colour over time (albeit much slower), the aluminium greatly restricts the degree of colour change so what you eventually end up with would be a charming and uniformly aged patina individual to your piece.

The usage of bronze is a historical reference back to the time when this metal was used in ships and diving equipment adding a layer of marine heritage to the watch.

The dial and bezel are in a shade of brown which I can only describe as ‘extremely manly’. When paired with the distressed leather strap pictured above, it makes me feel like a foraging hunter with a rusty rifle in my hand, a pick axe for extracting minerals over my back, draped in wet and slimy safari coveralls after having just ascended from a free dive spearing barracudas.

That was some over the top visualization but you get the drift.

The ‘snowflake’ hands pay homage to the Tudor watches used by the French Navy in the 1970s and look to be just about the right size. I do, however, find the numerals at 3, 6 and 9 to be a little out of place and am unable to figure out the reason for them being there. Some might be completely turned off this little ‘discrepancy’ and while it does take away the allure for me slightly, the size of the numbers do not differ too much from the round hour markers to make it seem completely out of place though it definitely is out of place.

Other heritage references taken from vintage Tudor watches include the Tudor Rose adorning the crown (while taking away a little bit of the huntsman manliness, stays true to the mission of drawing on old pieces for inspiration) and the pronounced beveling around the bezel.

Measuring 43 mm around, it is a large watch and would likely wear larger due to its striking colour and thickness. Though, as far as tool/dive watches go, 43 mm is not the most alarming dimension and moreover, do consider that this watch was not made to be a graceful understatement at a black tie event.

The Black Bay Bronze features a sealed caseback (as is often the case with dive watches) so one is unable to admire the MT5601 movement without the utilization of some hardware tools but that is not a deterring factor on any count.

Thoughtfully, the caseback is made from stainless steel with a PVD bronze coating as real bronze tends to stain the skin upon perspiration.

This, I say with a heavy heart but buyers will have to pick between the 2 straps offered and I find it incredibly hard to choose one.

On one hand, the distressed leather strap exudes the boldness of an intrepid traveler and the textural contrast accentuates the smooth bronze case beautifully.

On the other, the brown fabric NATO strap injects a touch of carefreeness driving across an image of a man who’s silently serious but isn’t afraid of having a little fun along the way.

For those opting the latter, please do not feel that somehow, you are getting the short end of the stick by selecting a seemingly ‘cheaper’ strap. Tudor’s NATO straps are quite something else altogether and to associate its build and quality with aftermarket NATOs you can buy for $20 is like comparing a pizza from Domino’s with one baked from a traditional wood fired oven.

For a detailed video of how Tudor makes their NATO straps, look here: https://www.youtube.com/watch?v=YZG-pkKKz6M

Whichever strap you eventually choose, there is no wrong choice to be made here. Both look fantastic and when paired with the bronze body, make for a very handsome timepiece.