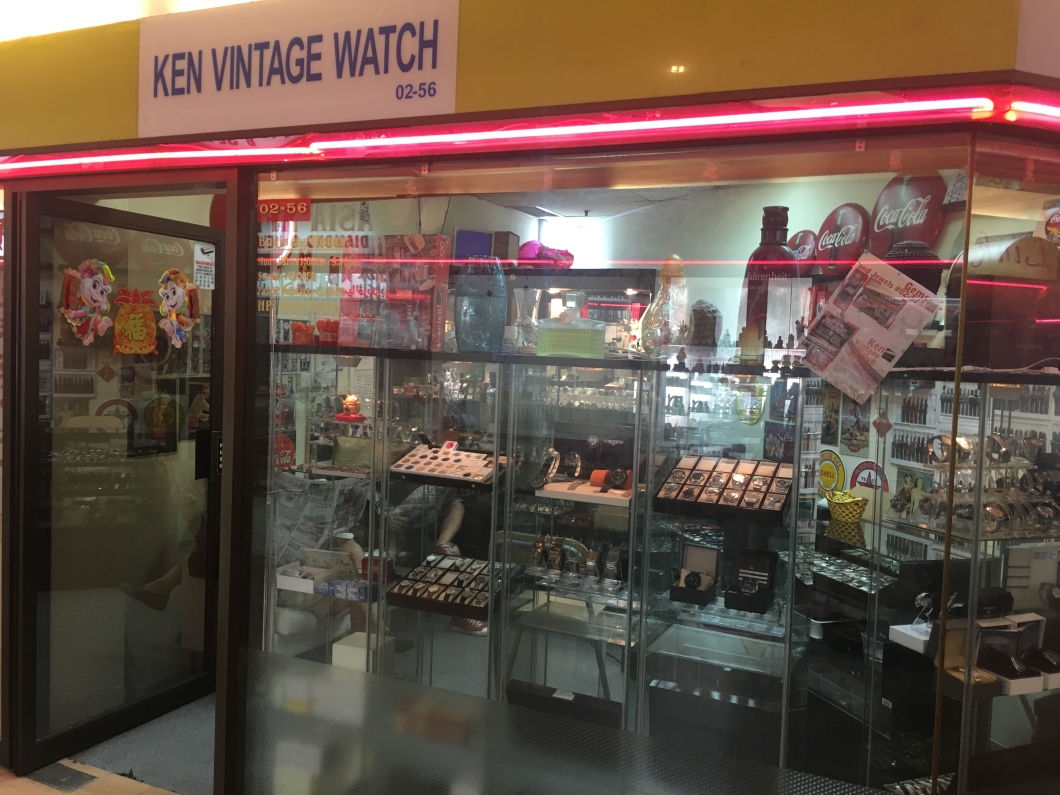 In his earlier days, he ran a small hawker stall selling ‘tze char’ (stir fried dishes) with a couple of family members. Upon its closure, Ken ventured into Coca-Cola memorabilia, operating out of a tiny shop in China Square.

Vintage watches are still very much the business here but one can’t help noticing the amount of Coca-Cola collectibles peppered around the shop space.

Ken Vintage Watch – simply named and straight to the point, drawing parallels with the 52 year old man who runs it – sits along a quiet stretch of shops in an equally quiet Golden Landmark Shopping Centre.

Kevin: When did you open this shop?

Ken:    I started about 5 years ago here. Before that, I was selling Coca-Cola  collectibles at China Square and happened to get involved in watches.

Kevin: So you stopped selling Coca-Cola stuff after that?

Ken:    Yes, because nobody was interested in them anymore. I have been collecting everything about Coca-Cola since I was 19 years old, I really love Coca-Cola. Many years back, I was even invited to be a member of the Coca-Cola Collectors Club. I also attended the members convention in Atlanta but that was a long time ago.

There was a certain longing in Ken’s voice as he reminisced his days as a collector. I noticed a momentous sparkle in his eyes following the topic shift to Coca-Cola. It was evident that his affection for it never truly died.

However, that sparkle soon faded away, much like the long lost hope that public interest will ever see a revival.

Ken:    I had more than 1,000 bottles of Coca-Cola in my home last time. When I started to sell them (along with my other Coca-Cola items) 7 years ago, it was very tough; nobody wanted to buy them and I gave up. In fact, when I offered to give it away as I had no space to keep them, some people told me that I would even have to pay them for the transport fee to come here and bring it away.

Kevin: That is truly sad. So then, you started selling vintage watches. How’s the business so far?

Ken:    Oh, business is so much better! My business has been doing quite well. Before I opened this shop, I sold my car away and poured the money into vintage watches. This is a very small business, I cannot fight with the big names dealing in preowned watches but I have something for everyone. The brands and models I carry are very affordable.

Kevin: What kind of people come to your shop to buy watches?

Ken:    All sorts of people, honestly. I have the doctors and the lawyers. I have white collared crowds, young people, old men and also tourists (Village Hotel Bugis sits above Ken’s shop)

Kevin:  I am quite surprised to hear that young people buy vintage watches from you. My impression of the general 20+ year old person is that either they will get something big and flashy, like a Rolex or street/fashion brands like Daniel Wellington.

Ken:   A lot of young people think that vintage means expensive but that is not true. I carry a lot of vintage Omega Seamasters and you can buy one for less than $500. More and more young people are finding out about vintage watches and their value.

I found the Seamasters to be in fair to very good condition. Faded dials and scratched cases are the norm rather than the exception so try to not get too hung up; it is a vintage watch after all.

Collectors new to vintage might want to know that they should always (as best as they possibly could) buy watches that are in original condition: no restoration of the dial, no excessive polishing of the case, no replacement parts e.g. hands, crown, bezel.

I’ll create a separate article on why this is so important and pitfalls to avoid in due time.

Qualifying all of the above plus finding a piece in immaculate condition takes patience, knowledge and a load of research, which is why it is immensely satisfying when you land the catch.

With that said, while I was unable to examine every piece in detail, and notwithstanding the fact that I wouldn’t be much of an adviser due to my limited knowledge about vintage, I’ll safely say that you can shop with peace of mind at Ken’s shop.

When I was snapping away with my DSLR,  I overheard Ken’s conversation with a dealer about a vintage Tudor that someone was trying to sell him yesterday. The asking price was a steal but as Ken lacked the knowledge in that particular series and could not ascertain its authenticity, he chose to let it slip.

A seller who only deals with what he’s familiar with is always a good sign.

Kevin: Where do you get your watches from?

Ken:    In the past, I will buy them from flea markets or when I go overseas. I still do that now but I also have foreign dealers whom I work with. Sometimes, they will recommend sellers to me and they will pay me a visit when they come to Singapore.

In fact, an hour before meeting up with me, he was out dealing with some guests from Hong Kong. He returned with these loots:

Kevin: I see plenty of Seamasters but do you have any Pie Pan Omega Constellations that I can buy?

Ken:   Yes, I have one (laughs). It’s in solid gold, at home and not for sale. They are so hard to find. Definitely not selling.

Kevin: So, how do you find the whole vintage watch scene in Singapore?

Ken:   I think it is getting better. People are more interested now. There is a lot of information out there.

Kevin: That’s good to hear. One of the primary reasons why I started my blog was because I feel that locals, especially youngsters do not appreciate the vintage market enough but that’s because they assume that vintage means old and boring.

Other than prominent Swiss brands, Ken also has odd pieces of Oris, Bulova and some brands I’ve never heard of, along with a sizeable vintage Japanese collection (Seiko, King Seiko and Grand Seiko).

Accessories like straps, Rolex dials and raw movements can also be purchased for those who like to create project watches (hunting, sourcing and self-assembling individual components to build an exact model of a vintage watch that can no longer be found).

On a level of 1 to 10 in terms of difficulty, building a project watch is 25. Steer clear unless you absolutely know what you are doing. 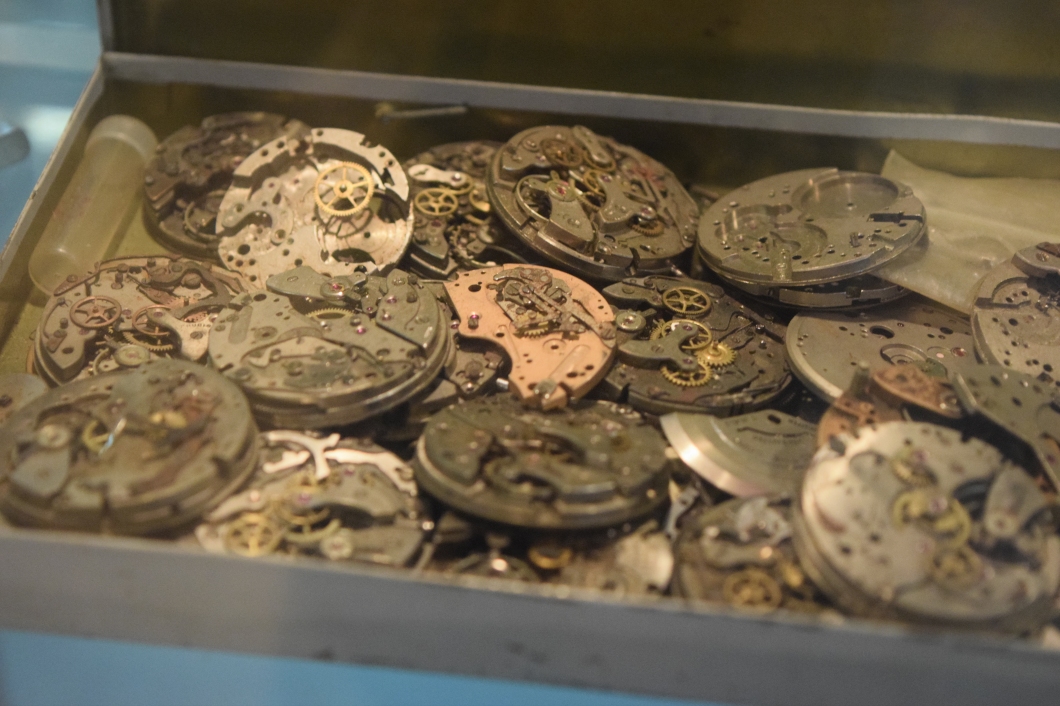 Ken: Your watch is very nice. What is it?

Ken: It’s nice. It has a vintage feel to it.

Kevin: Is there anything else in this shop other than the Coca-Cola stuff that is not for sale?

‘Yes,’ says Ken as he pulls out a large and rusted pocket watch from a shelve next to him, ‘This is not for sale.’

While he did not dwell into the reasons why he’s reluctant to sell this, he was open about how he acquired it.

Ken: I found this at the Sungei Road flea market a few months back.

Sungei Road is a 15 minute walk away and the ‘thieves’ market (so named because stolen goods were/are allegedly sold there) takes place every weekend with vendors selling all sorts of junk. This pocket watch is a testament that gems can be found in the unlikeliest of pits.

Kevin: Nice. And how much did you pay for it?

Kevin: Wow. That’s quite a find. Okay, one last question, what watch do you wear?

While a modern Seiko is at odds with what he sells, Ken’s choice is a matter of utility as his hands are constantly diving into and under the throngs of shelves and cabinets. He has also politely declined my request to take a photograph of him.

‘I am a low profile guy,’ he quips with a smile.

I spent about an hour in his shop and was welcomed with genuine hospitality even though his shop was running rather busy when I arrived. My requests for him to unlock his glass cabinets so I could get better pictures were granted cordially.

Ken also readily agreed to my visit and interview request without question when I first contacted him on Carousell 3 days ago.

Ken’s passion for vintage merchandise is evident. While his passion for Coca-Cola outshines watches and the decision to set up a vintage watch shop seems to be more of a circumstantial occurrence, he is still a man who loves what he does for a living.

How many of us can attest to that?

P.S. On Sundays, some of Ken’s watches are sold at a flea market in China Square. For more information, look here:  http://www.viewpointvintage.com/flea-market.html