Midway through Basel World 2015, TAG Heuer created some waves with the announcement that they were working on a tourbillon watch.

The tourbillon is a horological marvel of the highest order. Its function is to counter the effects of gravity on a watch’s escapement (the myriad gears and levers that make your watch come alive) by placing the escapement within a rotating cage providing supreme accuracy.

Watching one in motion is a breathtaking experience:

If you had about SGD 100,000 or so, yes, you could buy a Swiss tourbillon watch. For most, spending that amount of money is unthinkable and that’s exactly how TAG Heuer shocked the world with its announcement of introducing a tourbillon watch below 15,000 CHF.

‘All-black’ watches ooze sexiness and the Heuer-02T is one sexy beast. At first glance, it appears to be a skeleton dial but no, what you’re looking at is a very solid face with varying textures and curves. There’s plenty going on within that dial and might come across to some as extremely ‘busy’ but it works for me. Its unorthodox design is in line with Tag Heuer’s ‘Swiss Avant Garde since 1860’ slogan.

The angled hour markers with cut-in grooves are presented very strongly, reminding me of chrome car rims and perhaps that’s the point – the Carrera and its association with sports racing is still very much alive.

If I had to change something, I’d do away with the 2 lines of text running  from 2 to 4 o’clock and 8 to 10 0’clock and would have preferred the TAG Heuer logo at 12 o’clock to be slightly bigger. That said, a smaller logo helps to draw one’s eyes to the flying tourbillon sitting squarely at 6 o’clock instead, which of course, is the reason why you would buy this watch in the first place. 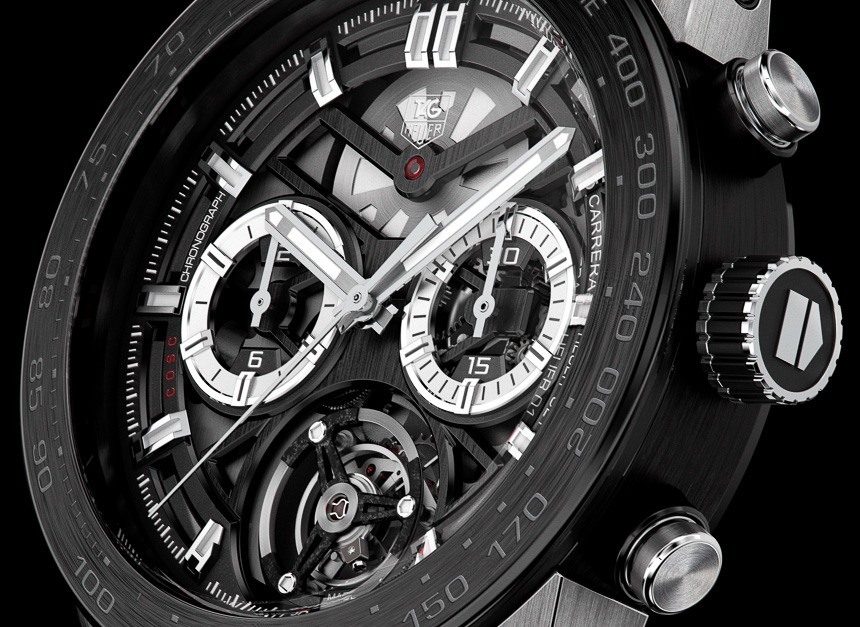 The 45 mm brushed black case is constructed of grade 5 titanium – a variant significantly stronger than pure commercial titanium and commonly used in air frame components and cryogenic vessels. Titanium gives off a bright shine as opposed to ceramic (commonly used in all black watches) with its matte and muted tone. Nothing necessarily good or bad, just a matter preference. The chronograph pushers –  reminiscent of pistons found in cars – are sleek looking  and further projects the Carrera spirit and feel.

One down side of titanium though, is that while being ‘hard’, it is prone to scratches and the flaws will be amplified on a shiny black case. Granted, with a tourbillon revolving in the middle, you’d be lucky for anyone to notice anything else.

Fitted with a black rubber strap mounted onto straight brushed silver lugs, the Heuer-02T is a formidable looking machine with a literal pulsating heart.

There’s not much information to share here as the exact movement used is unclear at this point but it’s definitely based on the CH80 – a movement first produced in 2014 to a run of 5,000 pieces and abruptly stopped for reasons unknown.

What’s known is that TAG Heuer has overcome the hurdle of fitting a single barrel, the chronograph functions, the automatic winding mechanism and the flying tourbillon within a diameter of 32 mm, whilst ensuring the counters were well spaced to create a modern, balanced look. On that count, it does look like a job well done. 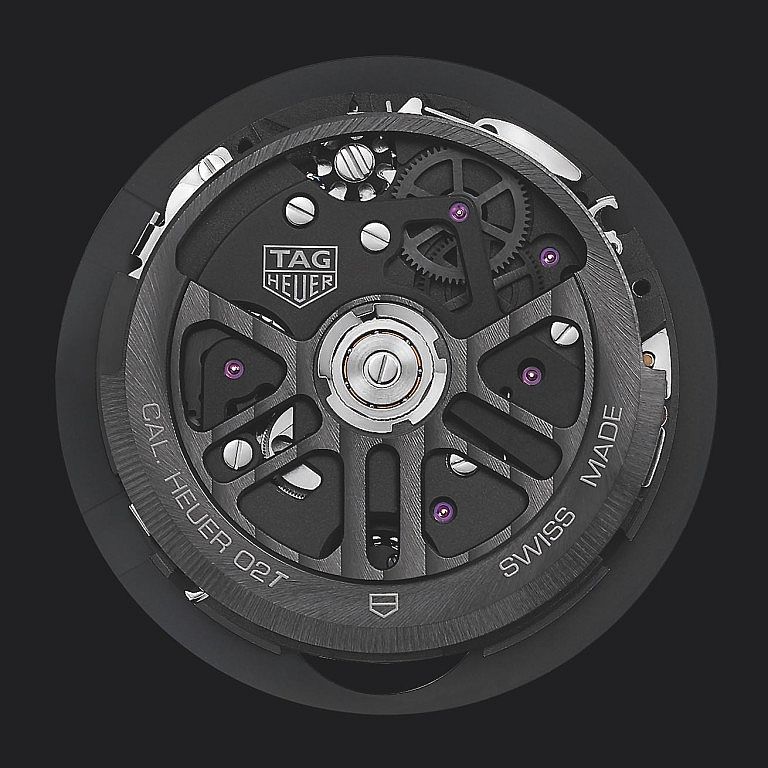 The flying tourbillon made from a combination of titanium and carbon is hand-crafted by 4 watchmakers. The assembly and fitting of the movement is also performed by hand.

TAG Heuer’s commitment to be the leading chronograph maker in the industry is evident. 10 million CHF have since been poured into their new facility in Chevenaz. Total expenditure into chronograph movement R&D over the last 5 years amounted to more than 40 million CHF.

That is some serious investment which makes one wonder how TAG could make money out of a tourbillon chronograph watch going at below 15,000 CHF.

TAG Heuer CEO, Jean Claude Biver (JCB) shared in an interview midway through Basel World 2016 that the key difference between what they’re doing and what other Swiss companies do when it comes to tourbillon watches is that TAG Heuer is using ’21st century technology to make 21st century tourbillons for a 21st century market.’

He also boldly claims that other brands are charging a premium for a tourbillon watch because they know that they can and people will pay, hence earning them a hefty margin before driving across that TAG Heuer takes the same margin off the tourbillon model as they would a normal Carrera.

I can’t testify to the authenticity of his words but it certainly does fit into his overall strategy to reposition TAG Heuer at more traditional pricing levels. If there’s one thing JCB does well, it’s his ability to bring about miraculous change wherever he goes.

Anyway, with a Swiss tourbillon at this price point, I doubt anyone would have much to complain about.