OMEGA Seamaster ‘Apnea’ – A Watch That Literally Takes Your Breath Away

Have you ever come across a peculiar looking watch wondering about what it does and the processes which drove its design? I certainly have and lots of them.

Rarely does a mechanical watch come looking the way it does for reasons that are only rooted in the cosmetic; there’s always a purpose for it being there, and more importantly, it always comes with a story behind its conception.

Today, we take a look at the OMEGA Seamaster ‘Apnea’. 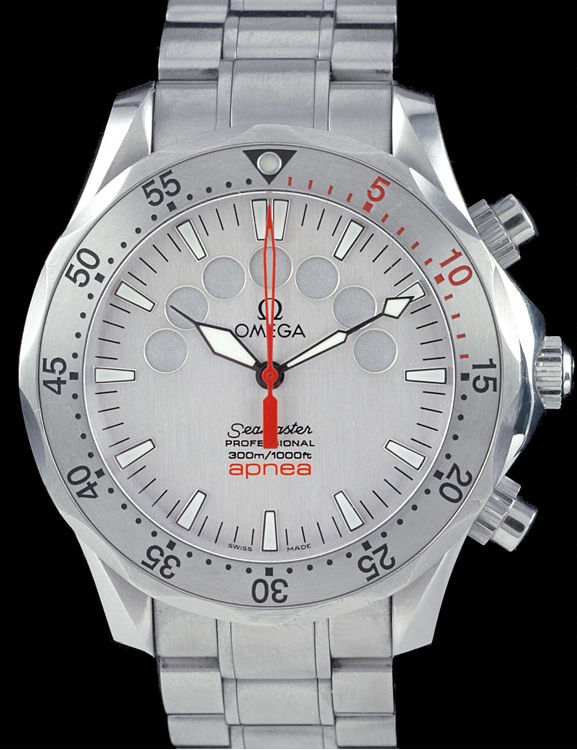 Apnea is a medical term for the temporary suspension of breathing. One of the most common usage of the term is in ‘sleep apnea’ – a disorder characterised by pauses in breathing during a sleep cycle.

Naming a watch after a suffocating condition certainly seems weird and while the Seamaster Apnea takes reference from the act of non-breathing, its application strays far from the medical industry; instead it has to do with a dangerous underwater sport known as free diving – where divers make a descent without equipment and test their lung capacities to see how deep they can go in one breath.

OMEGA has had a long running history with free-divers (and professional divers in general), many of whom picked an OMEGA dive watch before taking their plunge into the dark depths. Prominent people include, Yves Le Prieur – a French Naval officer who invented scuba, and Roland Specker – another Frenchman who achieved a free diving world record of 80 metres in September 1993.

The most prominent face of free diving was a man named Jacques Mayol – a French born in Shanghai in April 1927. An 8 time world champion between 1966 to 1983 and the first man to break the 100 metre barrier (no limit regulation where divers could use weights to drag them under) in 1976.

Jacques was a legend who would in his later years, dwell into research trying to determine if humans possessed a hidden aquatic potential which could be unlocked through persistent conditioning of the body and mind.

The OMEGA Seamaster ‘Apnea’ was created as a tribute to Jacques, who also played an active role in its design process and it was launched in 2003. 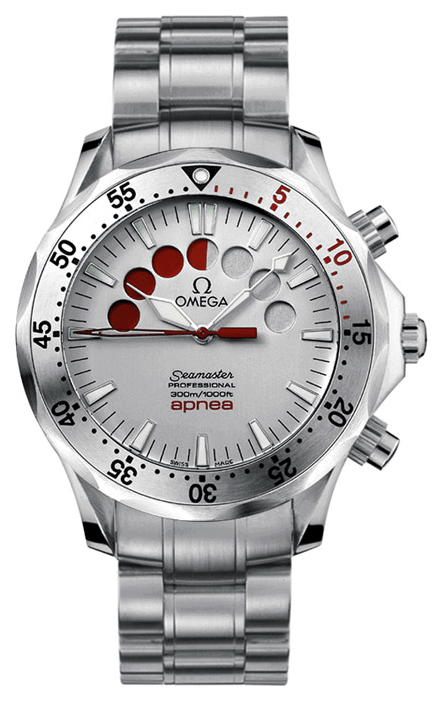 Apart from free diving, this watch also endorses ‘static apnea’ – another underwater sport where challengers remain static and hold their breaths for as long as possible.

By pressing the pusher at 2 o’clock, the 7 apertures on the dial turn from white (or black depending on which version you have) to red, starting from the left to right with a fully filled red circle indicating the passing of exactly one minute. It then reverses the process from the right turning red circles back to white (or black) for a maximum measurement of 14 minutes. 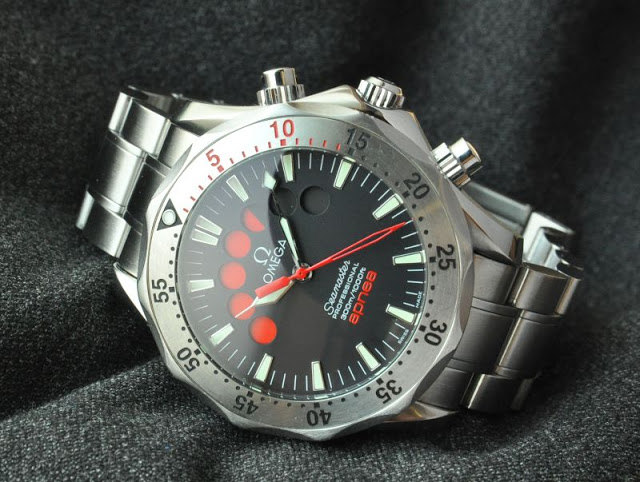 The reverse mechanism was a critical function as, by then, men have achieved beyond an already unthinkable 7 minutes underwater – a record first broken by Martin Stepanek coming in at 8 minutes and 6 seconds in 2001. Unfathomably, the standing record is now 11 minutes and 54 seconds, set by Serbian freediver, Branko Petrovic, in 2014. 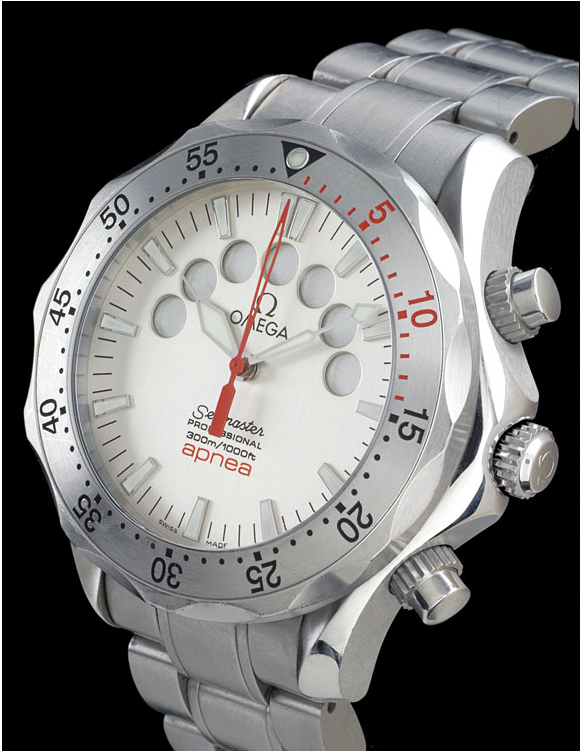 Key design elements requested by Jacques Payol (apart from the apertures) was the ‘breaking up’ of the hour and minute hands so as not to obstruct the circles from view.

While the timing of specific periods is hardly new in wristwatches, the Apnea was made to be much more legible than staring at a tiny chronograph subdial; when one’s trying to concentrate with a lack of oxygen, squinting to check elapsed time is an unpleasant task. 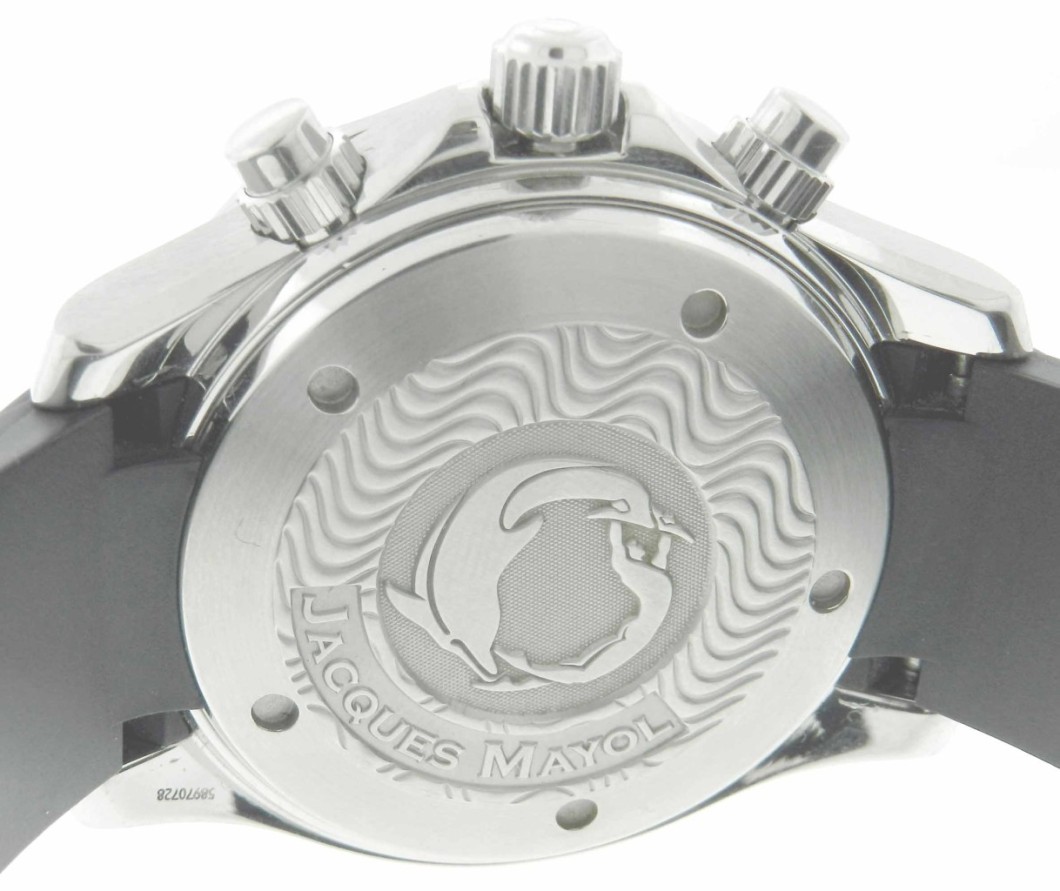 The caseback has a beautiful engraving of Jacques’ name and a centrepiece reflecting his fascination with dolphins.

Beyond the unique ‘apnea’ feature, this watch is still a very solid 42 mm Seamaster with water resistance up to 300 metres and packs a robust OMEGA Calibre 3601. Sadly, it wasn’t well received and has largely been forgotten. On a positive note, that means you can get one at a reasonable bargain.

The OMEGA Seamaster ‘Apnea’ can be found preowned in the mid SGD 3,000 range.