Montblanc – a brand best known for their exquisite fountain pens – celebrates their 110th anniversary this year.

For almost 2 decades, Montblanc has been in the wristwatch business and of course, that will be the focal point of this article.

By a stroke of good fortune (provided by a good friend), I was invited to attend a private product showcase held earlier this Wednesday and had the opportunity of examining several of their timepieces up-close.

Before we get into the watches, what would a Montblanc event be without some form of exhibit/display involving the fountain pens they’re best known for?

Seated in the centre of the room, a solitary man surrounded by bottles of Montblanc ink and pens of varying lengths was executing art on paper. 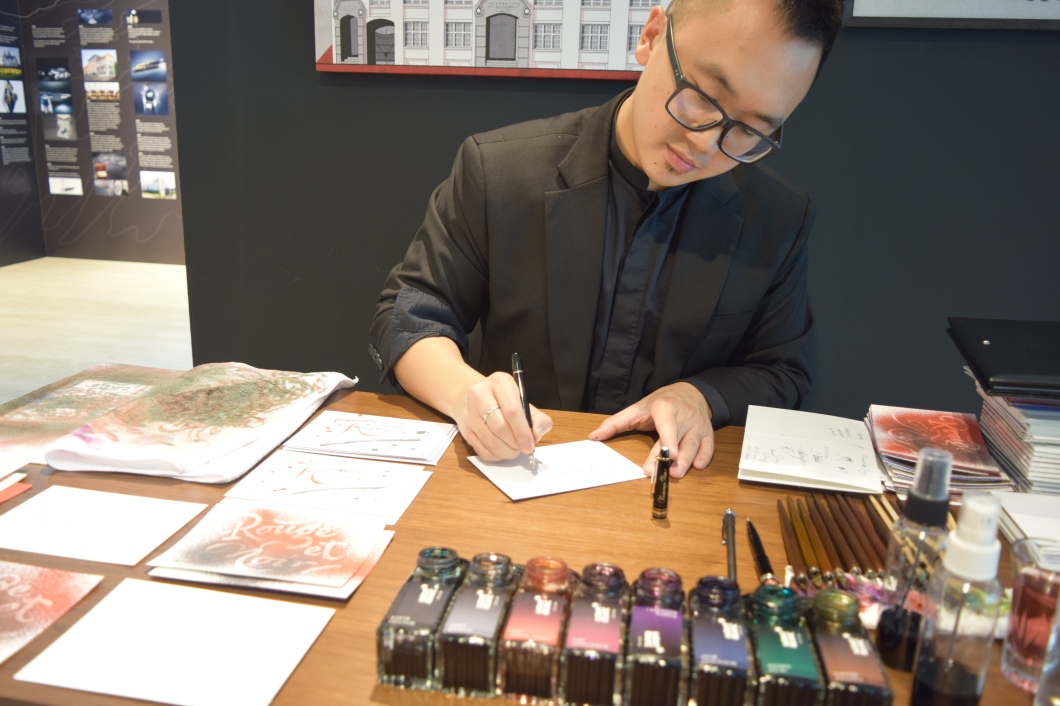 He graciously offered to handwrite me a card for Mother’s Day and I was wowed by how effortlessly he translated each stroke of the nib into such well formed characters.

Clarence has been doing this for 7 years and shared some tips about writing with fountain pens e.g. how the surface of the sharp end should be facing you and why you should not overly bend your arm to obstruct the ink flow.

It only seems befitting that there should be an artisan who has perfected his craft residing within the halls of the venue where we shall soon see the immense amount of horological landmarks achieved by the master watchmakers of Montblanc.

To find out more about Clarence and his company, Craftvaries: http://craftvaries.com/

A very short history of Montblanc and watchmaking

While it is impossible for me tell you about Montblanc’s short but illustrious history in watchmaking over a few paragraphs, I’ll just cut to the chase and say that Montblanc probably deserves more attention and respect than it is currently getting as a watchmaker.

Back in 1997, they introduced their first series – the Meisterstuck collection – and it was met with lukewarm responses. Montblanc was quickly classified into a rather degrading group: luxury brands who venture into the watch game to sell generic watches packing generic movements at luxury prices by slapping their brand on it.

Along the years, Montblanc has become a true manufacture with 2 workshops in Villeret and Le Locle producing almost every component (including balance springs) in-house.

The dedication they’ve shown in watchmaking also gave birth to several groundbreaking innovations, which is (to say the least) remarkable for a company barely 20 years in the industry.

Let’s take a look at the pieces on exhibit at the showcase.

First introduced in 2011, the Montblanc Tourbillon Bi-Cylindrique was the world’s first watch to feature a tourbillon combined with double balance springs.

The balance spring regulates the oscillation of the balance wheel,  which ensures that a certain frequency is kept so the hands move as close to the actual passing of time as possible. In ‘normal’ watches, the balance spring swings back and forth on a single plane; the one  in the Bi-Cylindrique expands and contracts on a vertical axis; and there are 2 of them.

You’ll cultivate a newfound respect for Montblanc’s watch makers after seeing one in action.

This is a single pusher chronograph, meaning that you can start, stop and reset using the same button as opposed to the more commonplace 2 button configuration.

Most chronographs are either operated via a vertical clutch or a column wheel system; this watch contains both.

The chronograph subdials are located at 5 and 8 o’clock. The dark silver hands follow the outer track while the red hands, the inner track. There’s a retrograde function built into the hands so the silver hand in the 8 o’clock subdial will ‘snap back’ to 0 upon hitting the 30 second mark; likewise for the red hand when it reaches the 60 second mark.

There is a whole lot of complications involved in this watch and Montblanc made the entire movement, including the tourbillon, in-house.

While a regular chronograph allows its user to track a window of elapsed time, a rattrapante can track 2 windows and the difference between them.

Suppose that you were timing a race between 2 runners and you start the chronograph upon their takeoff, the 2 central seconds hands (white and blue) will move in unison off their starting point. When the first runner crosses the finish line, you will depress the pusher, stopping the first white hand but the blue hand will continue to move till you press it a second time once the other runner is done.

The rattrapante is a high complication in traditional watchmaking and Montblanc has nailed it completely in-house once again, along with the inclusion of a tourbillon without a rotating cage, plus a GMT function at 4 o’clock.

Isn’t all of that some serious haute horlogerie?

As I’ve mentioned before, heritage only comes with the passing of time but innovation is fair game to all. If this is what Montblanc is able to conjure within 20 years, I’d say it’s only logical that we stop the ‘pen’ association and start looking at their watchmaking division as a true contender in horology.

When Richemont Group (Montblanc’s parent company) bought Minerva Institute – a highly respected watch and movement maker for more than a century – in 2004 and designated it to be Montblanc’s manufacture, the news was a major turnoff for long time supporters of Minerva.

To quote James Dowling (a prominent UK writer on wristwatches), it was as if ‘a 5 year old had been given command over a Boeing 747’.

Thankfully, Minerva was granted autonomy post-acquisition and kept its focus on their highly-esteemed chronograph production, while the acquisition by Richemont opened up a pool of talent who worked in perfect synergy with Minerva’s original team, pushing out creations such as their in-house tourbillons which would otherwise be unachievable by Minerva alone. 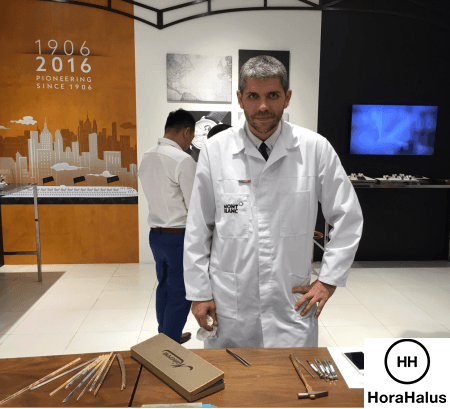 I had the privilege of meeting Mr. Julien Meribel who started his career as a watchmaker in Minerva and stayed through the acquisition. He currently resides at the Villeret manufacture, the former Minerva factory.

When questioned about the differences before and after the acquisition, he was quick to answer, ‘Nothing at all. We’ve always been doing things the same way. Let me show you an example.’

He proceeded to take off the Minerva from 1992 on his wrist and placed it beside a current age Montblanc chronograph.

The intricacy of the movements were absolutely stunning with top notch finishing. Here are some more pictures:

So, what do you think?

Montblanc might be a young company in watchmaking but they’ve leveraged on their design expertise in other products, translating that into amazingly beautiful timepieces beating a Minerva heart; one that has been constantly refined since 1885.

Minerva is legendary for their movements; Montblanc is so too, for their fountain pens.

When you combine 2 geniuses to create products fusing the best of their specialties, there’s certainty of success and in time, I sure hope that Montblanc finds its place within the hallowed halls of haute horlogerie.

Special thanks to the Montblanc team for hosting.